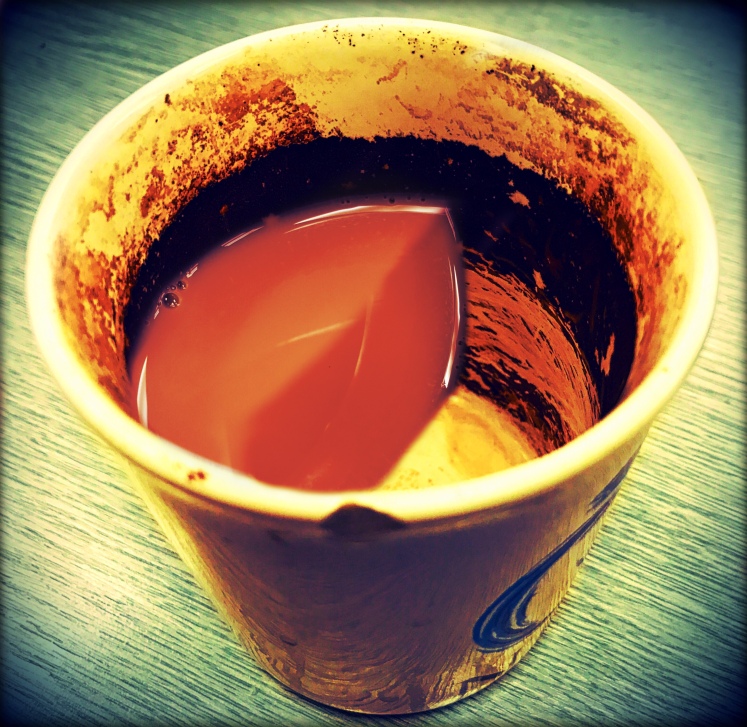 Today it felt like the whole world had realised that despite the turn of a new year, essentially it’s just another day, and in reality nothing has changed, yet.

Personally, I have lots of plans for 2019, as I am sure most people do, and whilst it’s easy to get swept along by the turn of another year, when it comes down to it you go to sleep, and you wake up in the morning, everyday, the turn of a new year is no different. Time evolves things, but it doesn’t necessarily drive change itself, that’s down to us, and how much we desire a change to take place.

I wanted to somehow capture that feeling in today’s picture. I thought a lot about how to portray change, and constant at the same time, and I ended up looking at the bottom of my rather well “worn in” mug. It has remained a constant for a long time now, bearing well defined tea stains, and even score marks from tea spoons within those stains, such is the weathering it’s subjected to. It is, a constant.

I treat it like an authentic Wok, and do not clean it, rather let it empower my brews all the more so through it’s historic battle scars! It’s not that I don’t want to clean it, but that I want it to remain as it is, for a fuller flavour; I do not want it to change.

The change element comes through the tea being half full, or half empty, depending on your perspective, and at an interesting angle; hopefully pointing out that it is ourselves, and our personal perception of things that drives us, to drive change. The cups chipped too, but still does that mean it’s ready for a change, or does it add to its authenticity, like a mark of it’s evolution to this point, giving it a sense of history?

Learnings – conflicting or opposing emotions can be hard to capture in a single picture, and this took a long time to eventually decide how I was going to capture the moment and emotion. I think it works, but without the explanation, I doubt it would resonate with most people. I guess most would simply see a dirty cup! So I’m going to revisit contrasting emotions along this journey, to see if I can improve how I capture them. Clearly there is some editing going on in this picture too, to “sculpt” the illusion of a slice in the tea, I would have liked the shadow to have been a little crisper, so some work to be done there next time I attempt something like this.

Love and courage in the age of isolation