Today I wanted to capture a picture of my daughters, Livvy and Izzy, feeding the ducks, on a mid-ride stop we often make.

It’s a tiny little pond, and the ducks are so well fed that they aren’t as boisterous as you often find pond ducks to be. These ducks live like kings, and the pond is often littered with bread, seeds and even pellets that local folk feed to them.

The shot I wanted, was the one below, with the girls stood on the platform, bikes parked and the bench in the foreground. I often wonder how many people stop here as we do, and how many passers by the bench, and ducks, have hosted.

Though I like how the picture turned out, it didn’t really have the vibe I wanted, I’m not sure why so I’ll ponder the image for a while and try and work it out.

For some reason, Livvy, our eldest daughter at 7, started striking some cool poses on the decking, so I took a few snaps! 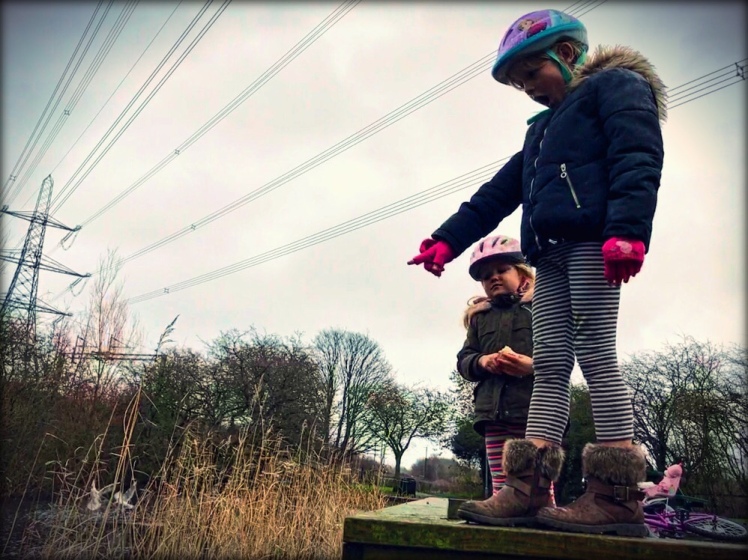 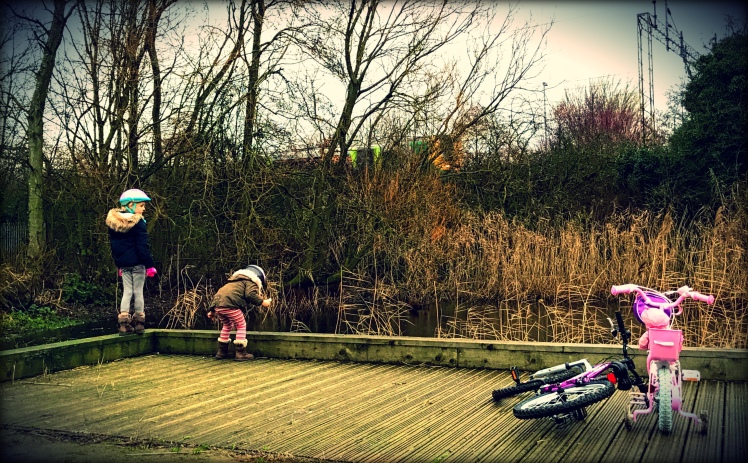 Not to be out done, Izzy her younger sister (3years old) got in on the action! 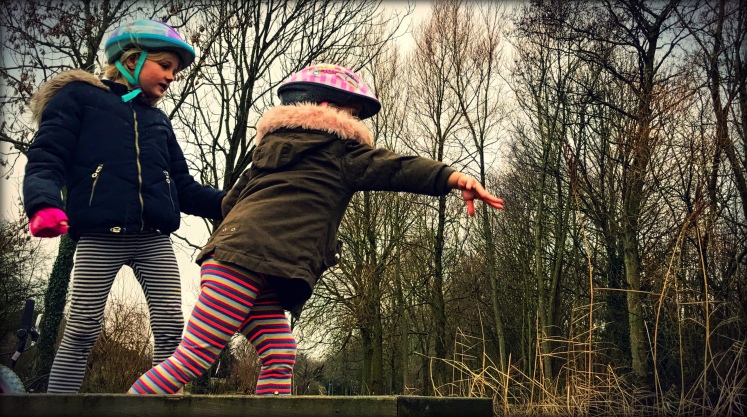 The image of Izzy looking out over the pond, bread in hand and deep in thought set against the wintery tree branches was the one that would become today’s picture. I really like it, it’s nicely balanced I think, and I can’t help but wonder what she’s thinking about.

On the second half of the ride, I took a couple more shots of the girls on their bikes, and they turned out to be pretty cool too! Izzy obeying the speed limits, Livvy racing trains, and another train zooming off into the distance.

Learnings – so many moments today, it was actually difficult to pick the one I liked the most, hence I have shared so many with you here. I hope you don’t mind! I guess photographing your own children can run away with you, but I’m ok with that.

Today’s bike ride was filled with what I call “incidental moments”, punctuated by the train whizzing past Livvy, and Izzy throwing the bread in, striking a perfect pose framed by her sister stood beside her.

Plus let’s not forget Livvys spontaneous and totally unprompted posing – she is a super star! These moments are precious, and today I had to be ready on the camera at all times to capture them. Things I’ve learned so far on this journey about focus and framing, balance and light, really helped me today. I thought less and snapped more, as things came naturally, meaning I could capture more moments.