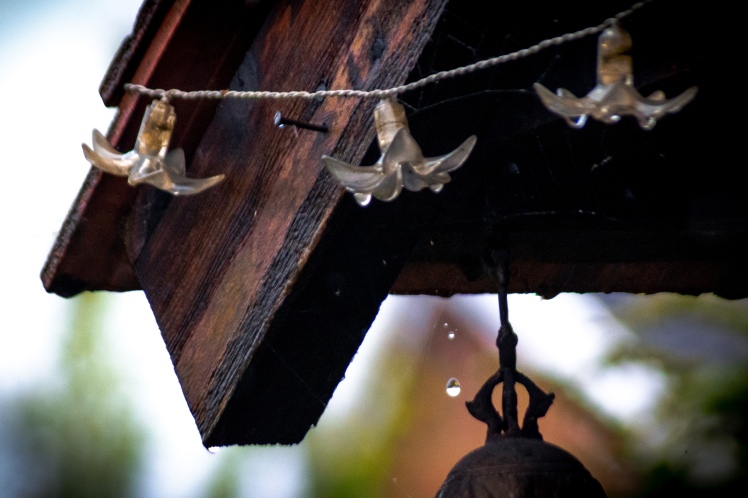 Today I was determined to capture a detailed shot, which included some rain, using my zoom lens in macro mode.

I took about a million shots (250ish), and for the first time output the shots in RAW format.

The subject matter was simply the corner of our BBQ roof, it was raining hard, it’s got some nice detail in the wood, fairy lights and a bell. What more could anyone want!

I wanted to share the RAW files with you, however the format isn’t supported on WordPress, as far as I know. Probably a good thing because they’re over 20MB each.

Anyway, learning from previous attempts with macro and zoom shots using my zoom lens, I got a chair out, and an office chair turned around in front of me, so I could steady the camera on the back of it.

The first shot here is the best I captured in automatic mode, including auto focus, and for the tech savvy among you, the details are:

I like the depth, and the colour is nice and warm, however it’s not as crisp as I would like.

So, into fully manual mode, including manual focus, using the following settings that I arrived at after a lot of experimenting;

Editing – preset vivid in light room and straighten, plus I edited out a few blemishes and the washing line. 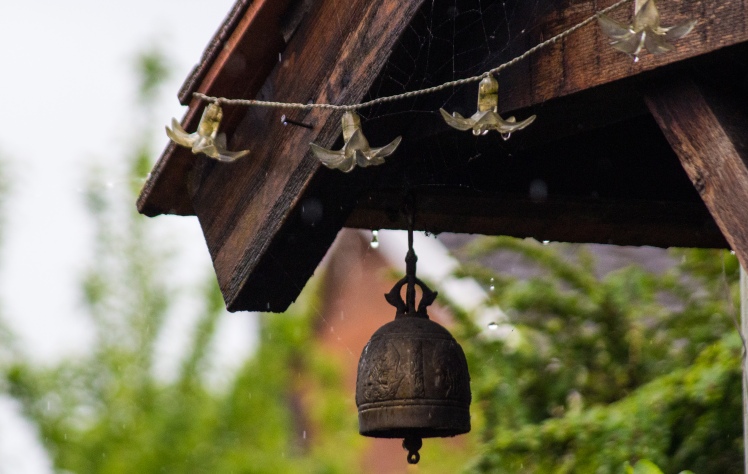 I think you’ll agree, it’s a much cleaner image, sharper and it “pops” a lot more.

The main difference in the settings was I think the shutter speed, I wanted that very fast to compensate for having no stabilisation, save for the back of a chair.

The other settings I then tuned to match the high shutter speed and of course light conditions.

It was interesting to see that I had to edit out the washing line in my manual mode shot, it didn’t even come through at all in the auto shot because the left side is totally blown out with light.

In today’s main picture. I’d captured so much detail that you could see the spider webs in the RAW file, and even in this one the JPEG, they are there, but I strengthened the shadows up which looked cooler but masked the webs – everything’s a trade off in life, right!

Learnings – RAW files a huge, but carry so much information with them I can’t see me ever going back to just JPEG.

I also had a little look at the histograms as I took shots and refined settings. Interestingly – and please remember this is the first time I have ever looked at a histogram – at the start big areas of my shot were flashing black and white on the thumb nail of my shot next to the histogram. It was clear to see this was indicating poorly exposed areas, and the histogram reflected the same.

As I carried on fine turning, and eventually arrived at an image I was happy with, there was only the tinies of dots, about three of them, that were flickering on the thumb nail. Pleasing to know I’m on the right track, and a really neat feature for a beginner like me to use.

All in all, I’m really pleased with today’s photographic learning. It took me a lot longer than normal, simply because it took so many shots, and then spent and age reviewing them all on my laptop.

You know what though, through every second of every frame I felt like a kid on Christmas Day.