Inspired by my work colleague, and friend Sue Flavel’s cool photographs of the Flintshire Bridge, I thought I’d try and take one myself, but of the new Mersey Gateway Bridge which is close to where I live.

It’s a huge bridge, and you can see loads of pictures of it, including fly over videos and footage of the enormous uprights being installed, on the web site here : Mersey Gateway Bridge 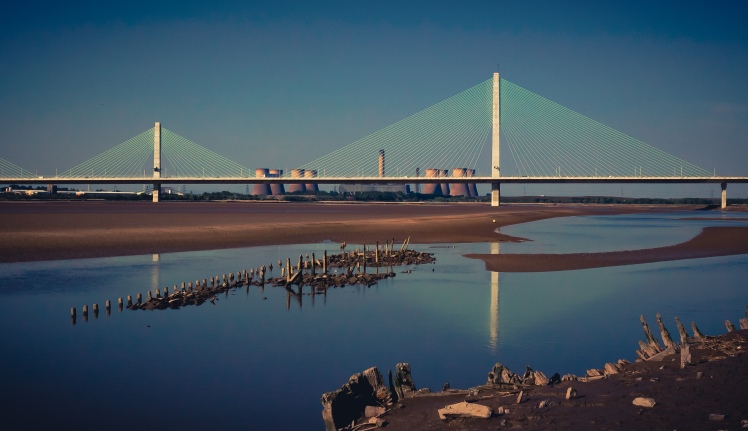 I wanted to get a perspective on how big the bridge is, and of how it twists across the River Mersey.

However it’s not easy to get a view from alongside it, and actually to get the shots I got I had to clamber over a few obstacles, down walls, and onto the flood plane itself. This challenge is always an adventure in one way or another!

When I got to a vantage point I was happy with, I saw those old wooden posts sticking up, I’m not sure what it was; a boat wreck, an old shed, I’m not sure. To me though, it looks like dinosaur bones, exposed by the receding tide for a brief time.

I think this shot (above) works a little better, because even though I wanted to get the detail in the bottom right corner, I feel it carries a bit too much weight, even outweighing the massive bridge.

It gives more depth, like in the shot below, but I think I prefer the scene without it, cropping it out lets you take more of the old cooling towers in the background in too.

The bridge was opened in 2017, and I can’t tell you how amazing it is at its job of opening up links to and from Liverpool. If you look at the website, it’s an amazing feat of engineering too.

However, you’ll have noticed that today’s photograph is of a different bridge, the one a mile to my left, down river.

That, is the Silver Jubilee Bridge, opened in 1961. The bridge is recorded in the National Heritage List for England as a designated Grade II listed building, and it closed for repairs and alterations when the Mersey Gateway Bridge opened, and is not due to reopen until 2020.

Its up-to you to decide of course, beauty is in the eye of the beholder, but for me today, the old bridge stole the show.

I paid a lot of attention to leading lines, composition and balance today, and I’m sure that increased freedom to focus on the aesthetics of the image, has come through my continued development in becoming familiar with the mechanics of photography.

During editing, I also learnt a lot about visual weight, and was amazed to see how a small(ish) feature could dwarf an enormous object.

The blog formerly known as American Daze or some sht