Today I wanted to focus on getting a sharp image again, and also I wanted to try and get that moody look I like whilst retaining as much detail as I could.

I know I took some photographs of them just a couple of days ago for my “Long Shot” post, however I needed a small and detailed subject that was on the move, to really test me – bees were the perfect candidate!

Something a little different today too, in that I aimed for a couple of different ‘vibes’ in the edits, because my main aim was sharpness and detail, I didn’t want the edit to overtake that learning curve.

The first shot here, is pretty much straight out of the camera, with the following settings:

I also went for a slightly subdued look to the greens, to afford more attention to the little bees.

Again, I didn’t push it too far though so I could look over the images and see how much detail I’d captured.

I tried a few settings, focusing on trying to minimise noise, and maximising shutter speed to capture the fast moving bees best I could.

I also aimed for a slight under exposure, to preserve the highlights, and I hoped more detail like the shine on the bees bodies.

It was cool perched leaning against the shed, steadying my arms as much as I possibly could on its roof, poised with focus on the leaf nearest the area the bees were buzzing about.

I’d hear them buzz past my ear, and feel a shot of adenine as it may signal one about to fly into the frame, and of half press the shutter, staying as steady as I possibly could.

I set the camera to continuous shooting, so I could fire several shots at once.

I had to set the aperture as wide as I could, to capture light on the fast shutter, but I didn’t want to max it out so I had a crazy narrow depth of field, or it would have meant most of the bees would be out of focus.

As time went on, and I took more shots, and I refined my settings further and further.

For the shot below I actually flicked the camera into its automatic “close up” mode, to see what the camera would do.

The first thing I noticed, was that it used the flash, something I very rarely do, I tend to look for the light. I have no idea if that’s “right” or not, it’s just what I do.

Anyway, I like the shot, but the flash has reflected against the Ivy leaves and garage roof a lot, and whilst I used the same settings in edit as the shot above, and dropped the blue saturation a touch, it’s still really “pumped” up.

So, I couldn’t help but do a few moody edits too, and I really like this one of a bee leaving his hideaway of to gather more pollen.

Thank you for today bees, you were amazing to watch and spend some time with, and you taught me a lot. 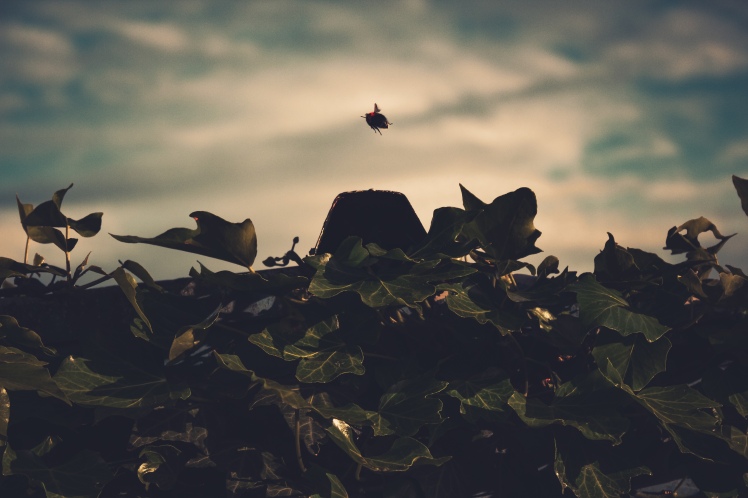 Learning’s – today was so cool, I set out to try and capture some detail, and hold that detail through the edit, and you know what I’m really pleased with what I achieved.

I still have a way to go, but I fared better than I thought I would, which is a nice feeling.

I took about 260 photographs today, admittedly a lot of just the ivy on the garage roof as I snapped away in anticipation of a bee passing by. Of those photos I edited about 30, but to save space on this blog site I can’t post them all here; if you do want to see them I’ll post them up on my Instagram.