Today my dear mummy popped in to drop a present off for Holly, for her birthday. Holly was just about to start the Sunday roast, and she offered my mum a plate, which she heartily accepted – and who wouldn’t, Holly makes an amazing Sunday dinner!!

My mums pretty cool, she’s always supported me in everything I’ve done, and my photographic adventure is no different.

For today’s photograph I was heading up another hill, whilst Holly got the dinner together. Neither of the girls wanted to come (to be fair we had already been swimming and ice skating, so they were pretty worn out) my mum did want to join me though. 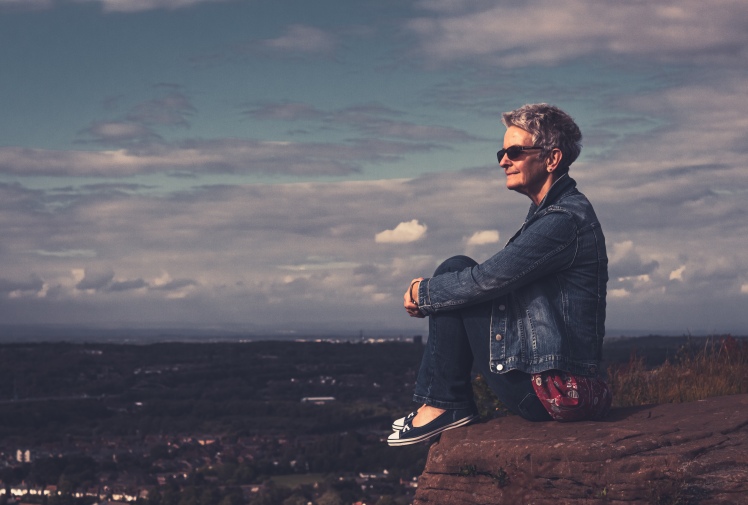 It’s always nice spending time with my mum, we are on the same wave length on all manner of things, and we have that really special “talk freely” relationship.

Anyway, we were heading up Frodsham Hill, which has a war memorial on top that I’d spotted from the motorway below.

Again, somewhere I’d never been up to before, and before going up I didn’t know it was a war memorial at the top, but I had see the tall stone structure from a distance.

The memorial remembers those from Frodsham who fell in both world wars; it has plaques remembering them with names engraved.

It’s a nice place to contemplate and remember them by, it’s very quiet and the views stretch from Liverpool across the Mersey Estuary, over the Cheshire plane and onto the Welsh hills.

I asked mum to sit on the tallest rocky outcrop, to get a photograph with her and the view.

She was more than happy to strike a pose, and I also grabbed a couple of shots as she fooled about looking cool with her collar.

When I showed her the photographs, this one below was her favourite, and I actually edited it with her.

She wanted emphasis on the highlights hitting her back and head, and she strictly didn’t want the lens distortion fixing.

You know what, I think she was right, the image looks amazing, and quirky – whilst having the main element of remembrance and contemplation.

The actual memorial looked stunning, back lit by a dropping but still dazzling sun light.

Looking out over the Cheshire plane, it was sobering to think of all that we have today. Lives buffet and roll with trials and tribulations that come our way in the modern world; but let’s never forget those that gave everything, so that we have everything.

I wish peace to all.