What a day for photography!

As I left work, the sky looked amazing, and I headed off on a slight detour down a road that I hadn’t been down for about ten years, maybe more, chasing the sky for a photograph.

Turns out, the road is now a dead end, and I didn’t get far before I had to turn around. However, there was a small lay-by not far from the dead end, so I stopped to see if I could get a photograph of the sky, and the eye catching cloud formations.

But something else grabbed my attention, three bee hives! They were seemingly just placed on a little bit of waste ground, that had been mowed. It was close to the perimeter of the big paper mill, so the fence and surrounding areas that had been left to their own devices were awash with all manner of wild flowers.

It seemed I’d happened upon a veritable bee heaven, in the most unlikely of locations – smack in the middle of one of Europe’s biggest industrial estates! 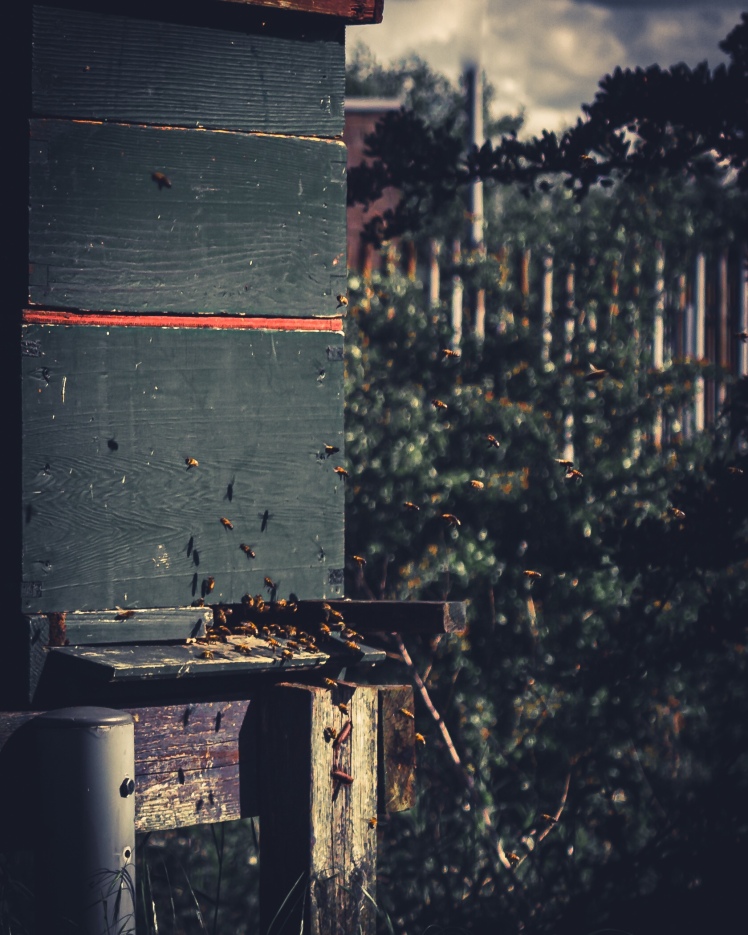 I tried to get the bee hives and the sky in the frame, without any industry, so the shot was tricky to compose; I really like the shadows and “oasis” feel to the one below. 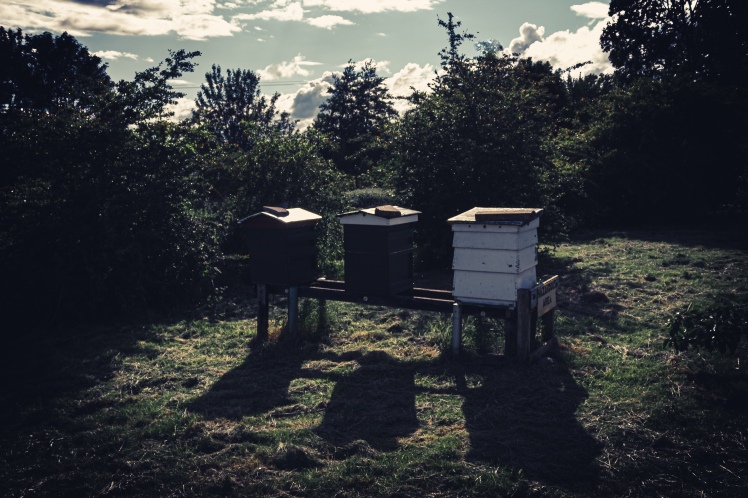 Happy with my shots, nicely exposed despite the bright sunshine thanks to my recent learnings about dynamic range and capturing details in highlights, I headed back to my normal route, and home.

However, the day was not done with me yet, and on the penultimate turning before arriving home, I noticed the night sky was sidled up right next to a sheet of almost pure black moody darkness – and it looked like the sky would split at any moment and unleash hell!

I instantly hoped for a storm, so I could capture it in a photograph.

I wasn’t to be disappointed, and not five minutes after closing the front door, it started to rain.

I went into the conservatory and the noise was deafening, the noise from thousands of pea sized hail stones thrashing against the roof.

Then came the thunder, who’s sound could only just be heard above the rattle of the hail stones.

It was magnificent, and I ran to the front of the house, grabbed my camera, and opened the window.

We all stood and watched, Holly, Livvy, Izzy and me, all watching in amazement!

Lightening was ripping across the sky by now, and although I tried I didn’t quite grab a shot, just missing it before the eye of the storm drew over the house, and out of view.

Still, the view across to the trees was incredible, atmospheric and very moody. I took loads of shots, it looked like a wild rain forest, shrouded in fog and being battered by the hail storm.

Finally, the hail subsided, as did the thunder, and briefly the clouds parted just enough for the sun to blaze through and cast some stunning colours across the scene.

Learnings – well, I put into practice things I’ve learnt about exposure while I had time to think, when photograph the bees against a bright sky.

Then, I put it into practice again when the bright piercing hail blitzed the scene against a backdrop of moody shadow and thunder, except this time I had no time to think, and had to hope my instincts were right.

Today was a good day!