Something a little different today, I decided to go and try and photograph Frodsham train station.

I thought it would be empty, but it wasn’t, there were a few people there waiting for a train; that meant this was the first time I was using my camera in a very public environment.

It was no issue of course, and I just quietly went about my business waking the length of the short platform looking for a nice composition.

Funny enough, whilst at the far end, opposite to the shots you see here, some lads playing with a football suffered a poorly placed pass, and the ball bounced onto the tracks.

“Can I go get my ball?”, came a request drifting down the tracks.

I turned around, and one of the lads was looking my way. I hadn’t found a composition I liked, and so headed back towards the station house and the bridge, and again came the same call, “can I get my ball back please?”.

By now it was clear he was asking me, and to be fair I was still in my work gear, black trousers and a shirt; obviously he thought I was some sort of railway official.

With that I made my way up to the bridge that crosses the tracks to see what the view was like from up there. At the top, I noticed the ball had been recovered – crazy really, it’s a football, easily replaced.

So as you’ll possibly have noticed by now, I found a composition I liked, and took a few shots. I also managed to get an angle where no people were in the frame, save one which I managed to edit out.

Again my main aim today was to get a nice photograph of a scene or landscape, that I could then hone my editing skills on, to try and bring out my style some more.

I’m pretty chuffed with how they all turned out, and I am really, really close to nailing my post processing in today’s main image.

Truth be told, I like them all, but the mood and vibe in the main pic is what I really love!

I was just packing my gear away, when I felt a rumble echo through the bridge, and could hear a train in the distance drawing closer.

I decided to crouch down at the top of the stairs where the colours and railings gave an interesting line, leading down and continuing along the platform edge, and take a shot when the train arrived.

It’s an interesting shot, and again I like the darker edit, because it feels more intriguing and also the lines pop a lot more. 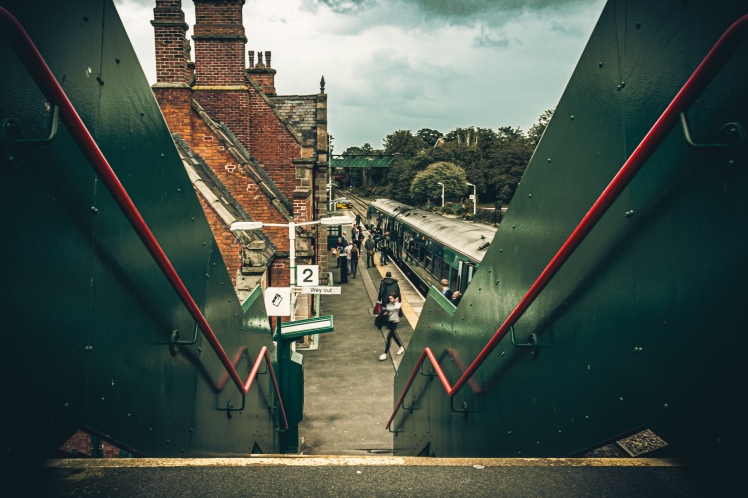 Learnings – more work on refining my editing, and I’m pleased with the progress I made today.

It is difficult at times to edit photos on a daily basis; I haven’t got time to edit all the photos I take to the point I would ideally like.

That’s not a moan, it’s a driver for learning – it’s forced me to refine some presets I’m now using, that’s really helped me define my edit style and tweak and adjust it as I learn more and more!

I’m happy with my progress so far this week, which is nice because mid week I was beating myself up a little over stuff, so it’s good to come out of the other side in a better place.

Have a great weekend everyone!