Hmmmm, I wasn’t expecting that! I went back to yesterday’s spot as planned, and timed my arrival for bang on sun rise. From some vantage points the view was amazing, but from my chosen spot, it wasn’t quite as far reaching.

I wanted to stay true to my word though, and still took today’s picture from the same spot and the same angle. The fog was seriously dense at low levels, and above it was super clear. This gave rise to some amazing colours, mainly blues, yellows and dashes of pink.

I actually really like the picture, it has a lot of intrigue about it, and it feels just like the crisp, clean morning it was. Even though I know what the fog was hiding today, and the night was hiding yesterday, it still holds the feeling of mystery for me.

I’ll keep an eye on the weather over the coming days, because if these circumstances occur again, I found some really nice views that will be worth a look for a further picture.

When I arrived home this evening, the old faithful lamp posts look cool in the thick fog; lights bright, broken only at intervals by creeping tree branches.

The lamp post that had inspired me in a previous picture by switching itself off, tonight shone bright, with a different hue to the others. I assume a different colour bulb has been fitted to my old friend, and the blue glow it emits shines on the street in a cool contrast to the warmth of its street light brothers.

Above is the shot I wanted, and with my new found photographic “confidence” I waited until passers by made their way past, and cars cleared the frame. I would in the past, have taken a quick snap and scooted off.

I took a couple of pictures of the cars too, because their light beams added to the scene, but they did make it less thought provoking for some reason, I feel. The one above is the one I’ve spend the most time lost in. 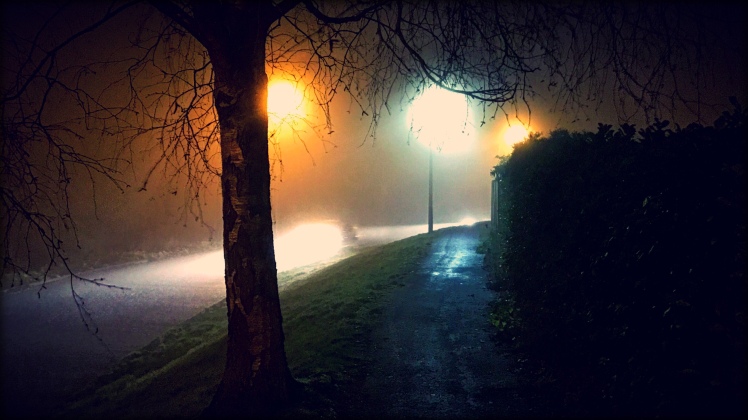 Learnings – the weather of course plays a big part in photography, it’s offered me both opportunities and complications in equal measure. This morning, had I not been on route to work, I could literally have spent hours chasing the opportunities the fog had presented.

It has given me lots of ideas for future pictures!

Tomorrow, I’ll try again for the “The Day” shot to complement yesterday’s “The Night”, though my morning schedule is tighter tomorrow, so let’s see how it pans out. I hope this digression hasn’t built it up too much beyond its natural level……

Life and Death in the New World

Reflection of My Journey

Stories , Poems , Reviews and more from the heart !

A BEST OF LIFE

It is in your moments of decision that your destiny is shaped, It is during our darkest moments that we must focus to see the light.