It was all planned so beautifully! This weekend for a change I had pictures planned for today, tomorrow and Sunday.

However, that fell apart tonight. The plan was to go fishing overnight today, and at the same time take a nice picture of my “camp” for the night.

I arrived at the lake at about 7:30pm, to a totally rammed car park, which quickly put paid to tonight’s planned shot, and my nights fishing.

It’s been really mild all week, which not only makes for a comfortable nights fishing, but it also increases your chance of catching something. So I can’t blame the guys and girls out on the lake tonight, it’s just that I got there too late, again.

Earlier on in the evening when I was packing my car, I noticed a string of lights flashing in a tree in our back garden. They hadn’t flickered for some time, and I imagine it’s due to the increased day light energising the solar panel (and the local anglers) sparking it into life.

I thought they might make a nice bokeh shot, so I took a couple of pictures. 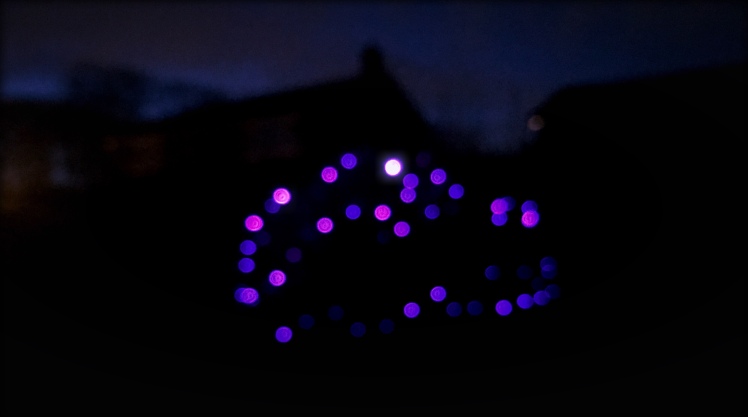 And set off on my doomed to fail fishing mission.

On the way back home, I thought I could save today’s photograph by taking some more interesting pictures of these pretty purple lights. However, by the time I got home, their glow had faded to nothing.

Still, all was not lost and plan C came into view; notice that little cluster of white lights on the right of the second picture above? They were still glowing strongly, they always do, all year round.

The more pictures I took, the more it started to look like a strange planet.

So I went with the flow, and tried to emphasise the point that this might be some strange new plant I had discovered through nothing more than a failed adventure.

My very own Planet X!

Learnings – the warm spring like sun at first thwarted me today, in getting my shot and my fishing trip. However, had that same sun not been beating down all day, I might never have discovered my Planet X.

Fate is an unpredictable adventure, you just have to go along with.