For today’s picture I wanted to have another go at photographing something close up, and practice using artificial lighting some more.

I grabbed my trusty light, and headed off out again, only to the back garden, but it’s always an adventure somehow this challenge no matter where I go!

Initially I thought I’d photograph something in the garage, firstly because there is stuff in there that might be interesting to photograph close up, and secondly because it was raining.

Nothing really worked out or took my eye in the garage, so I tried something I’ve had a go at in the past but failed; so much so that I abandoned the shots I took and never shared them. 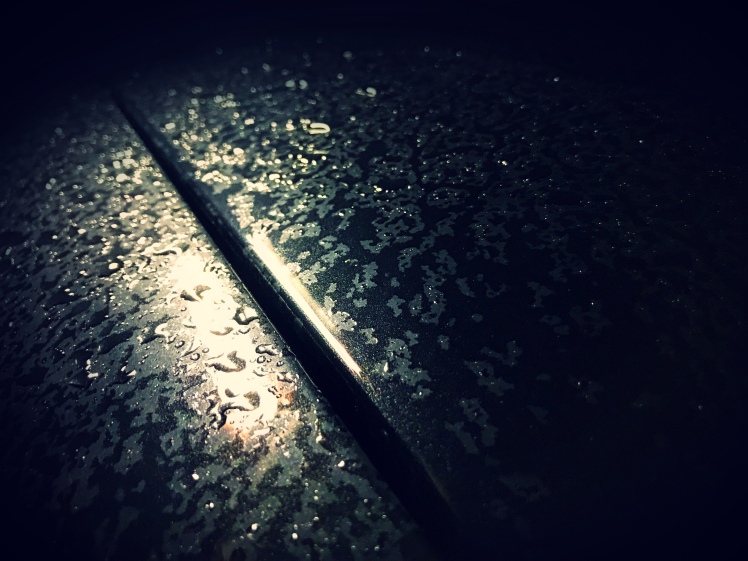 However today, for whatever reason the pictures I took turned out much better.

Apart from that is, a rather spooky reflection shot I took!

Anyway, my subject matter was the form of a car in the rain at night. Sounds kind of strangely specific, however cars always look good in the rain, and they have some really interesting curves and lines. Well I think they do, anyway.

The way the rain water rolls off in places and forms droplets in others creates really cool patterns, that you don’t generally see anywhere else. 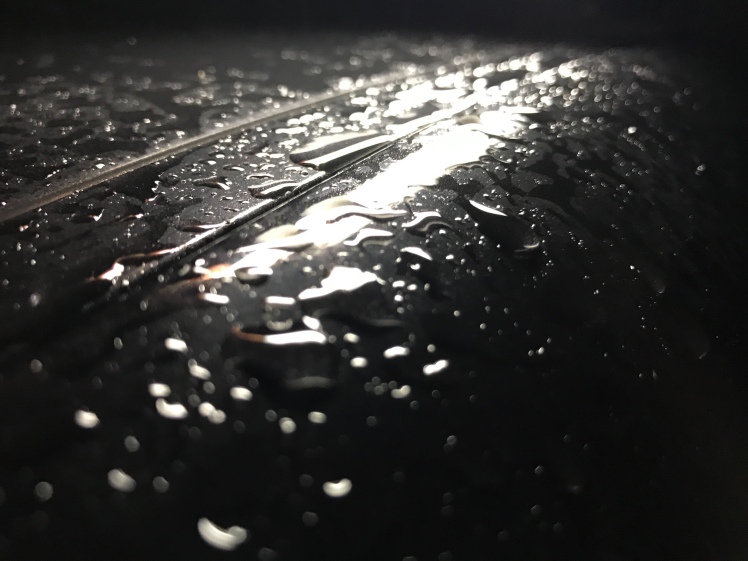 Whilst taking my shots, I again tried to position my lighting so it looked good on the car, same as I did yesterday when photographing the pond.

It was interesting that the same positions that worked yesterday for the pond, gave a similar result tonight on the car; however it wasn’t the effect I was after in today’s pictures.

What worked better today was having the reflection of the light in the actual frame. You can clearly see the tubular shape of the light in the two shots below, but I did position the light so it followed the natural lines of the car itself, and looked part of the scene. 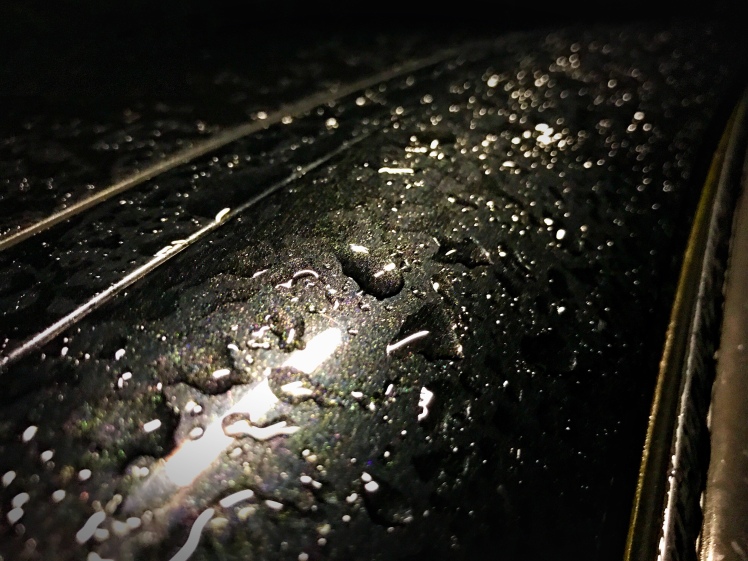 When the light was at odds with the lines of the car, even when the lines weren’t obviously visible, it looked too obvious; like in the shot below. 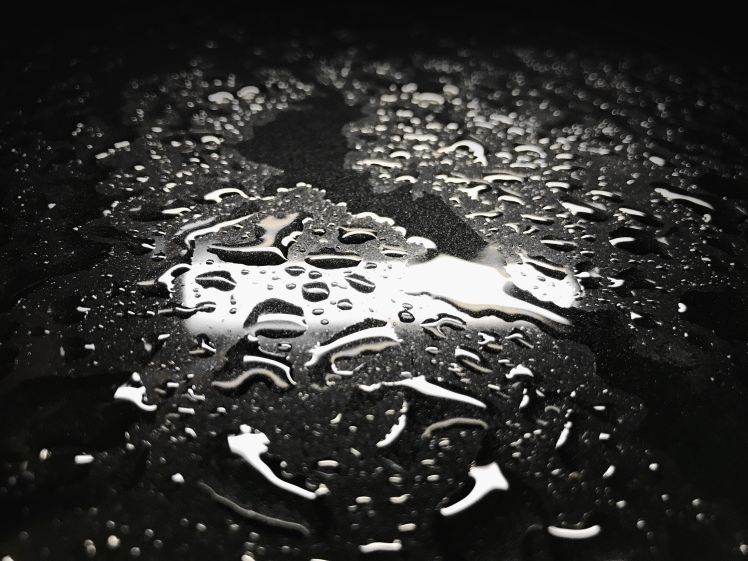 Finally, as I was wrapping up, I noticed a solitary leaf on the boot of the car, and decided to position it in a few shots.

I don’t normally rearrange a scene at all preferring to capture what’s naturally there, however this was an obvious situation where a bit of staging fitted the bill.

I don’t know about you, but to me the leaf looks for all the world like a pair of lips, and the very solitary subject matter really changes the whole feel of the pictures. 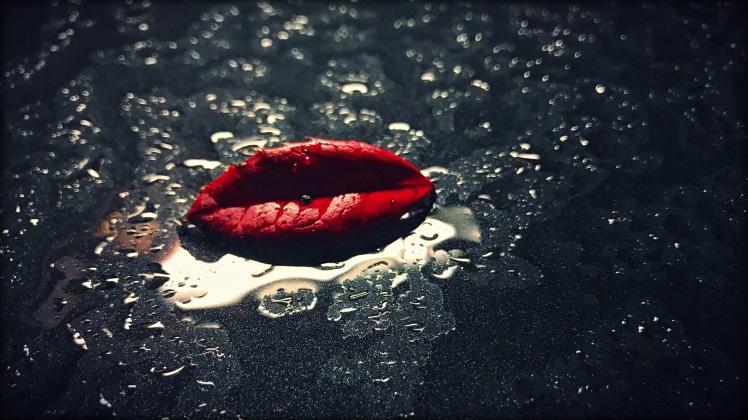 The lighting setup that I found worked best with the leaf included in the shots, was when I hid the main glare of the light just behind the leaf. It provided maximum glow and lighting, but without the bright obvious glare.

Positioning was crucial though, and if the glare was at all obvious like in the shot above, it made the leaf appear like it was floating. I also really like the more subtle lighting in the shot below, and I very nearly picked this one as my main picture for the day. 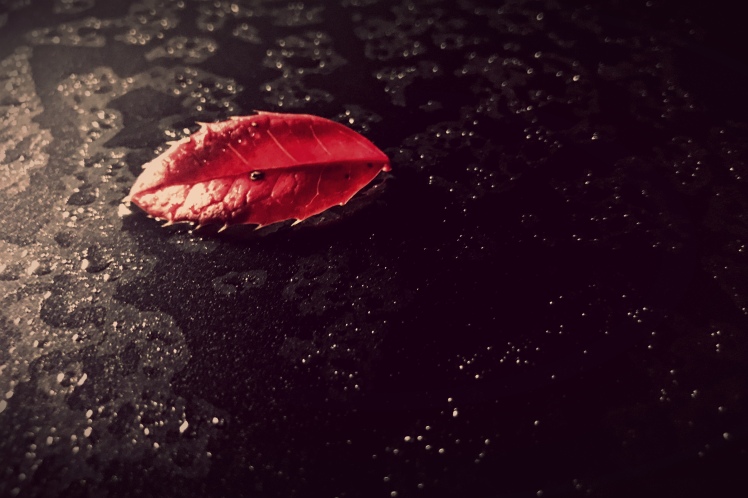 Learnings – loads more about lighting, and especially positioning of lighting in relation to the subject. It was really interesting to see that what I learnt yesterday didn’t directly translate into today’s shot. I guess each scene will need lighting on its own merit, and maybe there aren’t set rules because every scene is potentially very different to the last.

Also, don’t avoid the rain, it can be mega interesting!