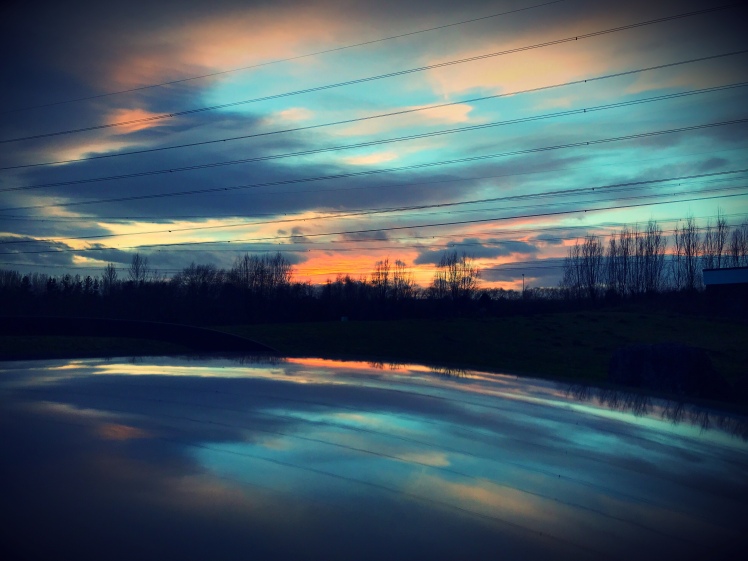 As I left work today, my colleague and friend, Terry, asked what today’s picture was going to be. At that moment, I didn’t know was the answer.

It had been a pretty full day, and I hadn’t had time to make a plan yet for today’s photograph.

I set off for home, and with the range on my car saying a measly 16 miles, I swung into the nearest garage. As I did, I noticed the sunset, just dipping behind the horizon of my view.

I quickly filled up, grabbed a treat for the kids, paid and set off again for home, but this time with a slight detour in mind.

I wanted to try and capture the sunset, but also with a reflection of the car roof in the frame, and some interest in the mid-ground in silhouette.

You might be wondering how I form these ideas, and I would love to tell you, but I honestly don’t know where they come from!

I think today was just the inspiration provided by the view of the setting sun, the fact I’d missed out on capturing it last week, the pictures I’ve done recently on reflections in puddles and on cars and of course my imagination.

So I guess the ideas are coming from my growing experiences during this challenge. That’s interesting to think about, because I am fully expecting to have more days where I draw a blank on ideas, but given today’s experience, maybe the opposite will happen. Only time will tell. 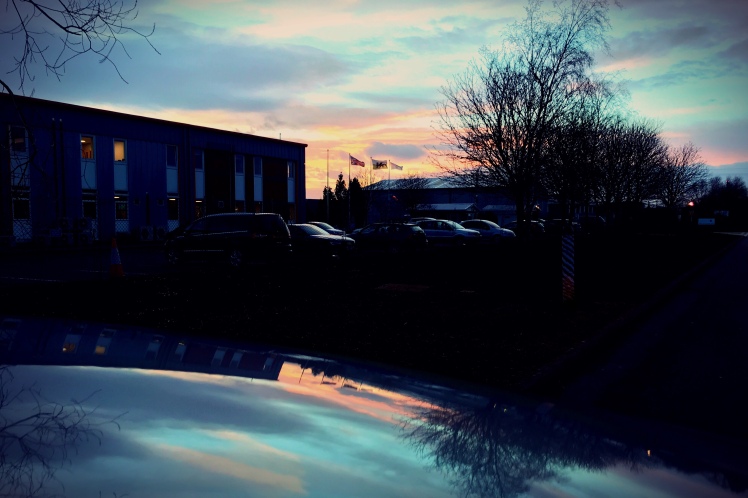 This picture had the added interest of the flags waving, though I couldn’t really get a view point I was 100% happy with.

As I raced around the industrial area next to the garage, trying to get better views of the sunset and frame, at this point something peculiar happened.

I started to giggle to myself, but all I was doing really was driving around an industrial estate, chasing the sunset and taking pictures. How strange is that!

I think it was because I wasn’t nervous about what people would think of me stopping to take a shot, I was just doing it – and that felt good. 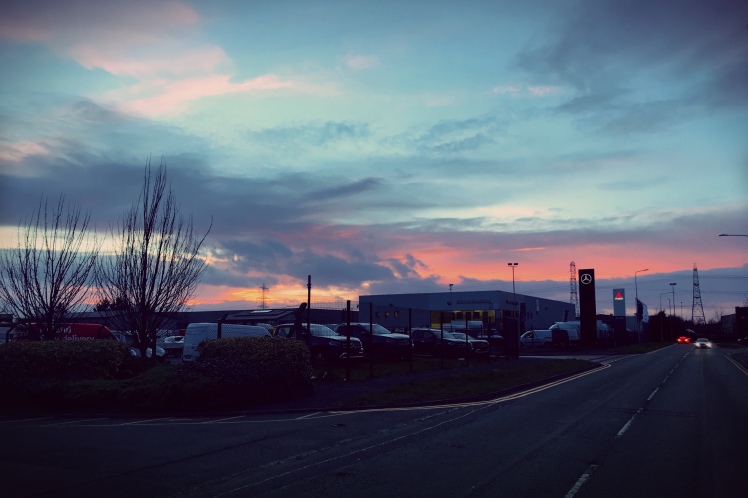 By this point I was howling with laughter, stood in a lay-by with the cars and heavy goods vehicles whizzing by, and one to my right parked up for the night.

They must have thought I was crazy, but were any of them laughing as much as I was?

Learnings – the pictures with the reflection taken at the front of the car, are much better than the ones at the back. The reflective surface was much bigger, and what I like about that is that I’ve learnt to take note of the details. I had an aim, and I perused it, I paid attention to it.

I also noticed the power lines cutting through the sky in today’s pictures straight away, again pleasing because I’m naturally now more aware of what’s in my frame. I took some shots with less lines, but in the end the overall image carried the feeling off that I wanted, even with the lines, so it was a way up of the pros and cons.

I also wanted the reflective surface to be a bit of a mystery, not obvious straight away that it was a car roof, and on that score I’m pleased with the result I eventually got.