Is the type of thing I imagine could be heard in the 12th century when Ewloe Castle was being built.

Well I muttered the same to myself a few times today; taking this photograph was so difficult, from start to finish!

I was in the area of the castle at the end of the day today, and it was a pretty easy decision once I’d had the idea, to go and photograph it, however taking just one photograph was where the trouble started.

Actually taking the photograph was fine, I captured it technically OK, however picking just one compositing out of the myriad of stunning views of the castle was really difficult!

I walked around it a few times, and whilst it was nice to reminisce about times I spent here as a kid, there was just so much to photograph. I wanted to avoid the classic compositions too, from the top for example, or front on.

I really wanted to capture it looking like a real ruin too, like nature was claiming it, and the trees and shrubs were slowly swallowing it up.

I also wanted to capture enough so it was clear it was a castle ruin, and also I wanted to include the “trap door”, that I always imagined was where they condemned wrong doers to. A grim fate….

Eventually I settled on the compositing you see here, it captured all I wanted, with a nice tree lined background, and had all the features I wanted.

I took my shot, again using exposure bracketing, and the settings:

I was pleased with my capture, and headed off home.

Then came the editing……. the image seemed to really lend itself to having some vibrant greens in it, to give a good definition between the trees and the castle.

Going with this vibe, I came up with the edit you see above. I exported the image, and closed my laptop.

But something was bugging me; the bright vibrant greens just weren’t me, and they didn’t look like the undergrowth and the castle ruins were merging as one, as nature was slowly reclaiming its prize.

So, I opened my laptop back up, and stayed true to my own gut feelings on it. Same as, despite the many things I saw to photography, I stuck to my word and just took the one image, I was going to edit this in “my style” as I have committed to do previously.

I eventually settled on the image below. “Much better”, I thought to myself, now it feels how I want it to. Full of flat shadow and deep mystery, and the ruins look like the woodland is slowly making it part of nature itself.

But something still wasn’t quite right, and I made one little change from the image below, to the main image at the top of this page.

It’s not obvious at first, and I’ll let you enjoy looking at the image and finding it. 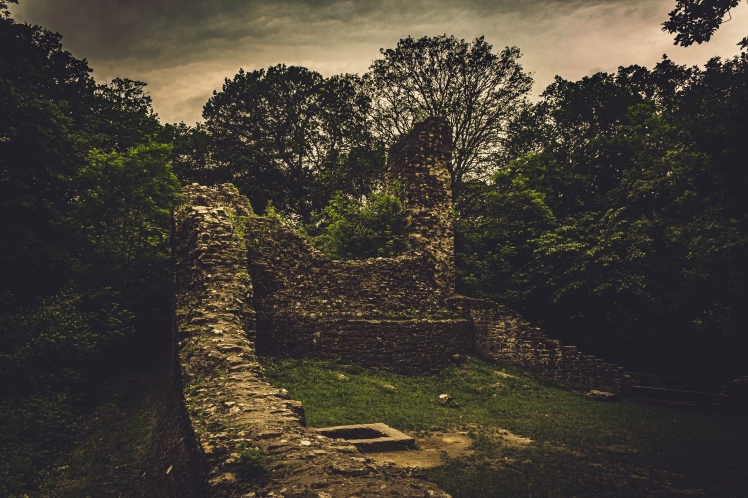 Learnings – this was a super test for me, I could literally have taken 300 shots. As an example, when I got to the top of the castle (the original steps still go all the way up the main tower, that you can’t see in this image) there were two doves, sat on the very top just chilling out. I looked for a composition to include them in a shot, but being so high up, it was just pure sky behind them, and I didn’t feel it would make a good shot, despite the fact doves were sitting atop a 12th century castle ruin!

There is a little crevice in a rock at the foot of one of the towers, and as a kid I always imagined invaders would use it as a route to sneak into the castle; again, nice shot as part of a set maybe, but on its own I couldn’t get any castle features in with it.

There were just so many opportunities, it really forced me to asses them all, and try and find something I truly felt encompassed what I was trying to capture, in just the one “take”.

I feel I achieved it, and I am really pleased with the shot, and also that I didn’t settle for my first edit.

Not only that, but it was a joy to re-live some happy childhood memories for a few minutes as I walked around this magnificent place.